What is the doctrine of separation of powers?

In Australia, the doctrine of separation of powers divides the institutions of government into three branches: legislative, executive and judicial - covered in Chapters I, II and III of the Commonwealth Constitution.

The legislature makes the laws; the executive put the laws into operation; and the judiciary interprets the laws. The powers and functions of each are separate and carried out by separate personnel.

No single agency is able to exercise complete authority, each being interdependent on the other. With the legislative functions divided this way, it should prevent absolutism (as in monarchies or dictatorships where all branches are concentrated in a single authority) or corruption arising from the opportunities that unchecked power offers.

The doctrine of separation of powers can also be extended to enable the three branches to act as checks and balances on each other. Each branch’s independence helps keep the others from exceeding their power, thus ensuring the rule of law and protecting individual rights and freedoms. 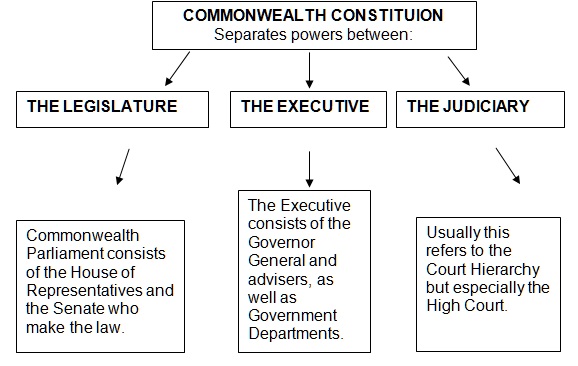